Last year, spring 2016, my mum and I went to Montreal for a weekend shopping trip. It was great! Other than it rained the whole time, so we spent most of our time downtown in the underground shopping malls. But, I did find some great RTW pieces, and one dress from Tristan that screamed COPY ME!!!!

So, on my return, I hauled out a knit that I’d bought the previous year in Montreal, which I think is rayon or viscose with spandex (or something along those lines) . Another one of those purchases that I had no idea of what to make with when I bought it but it felt so lovely, and straight to the stash it went.

Here’s the RTW (blue) and Copy side by side. It’s actually the second copy, the first one was a wearable trial, as in I’d wear it camping (did that) or in the back yard only.

This dress is actually two pieces, top and skirt, attached at the waist with an elastic casing and a drawstring. The Jalie 3352 dolman top turned out to be a prefect starting point. Using the measurements from the RTW dress, I traced the Jalie pattern and made the following alterations:

This is what I use my sewing journal forms for, it’s so handy. (FYI - there’s going to be an update/additional version up in my Google Drive soon, because of my new-ish machine…yet to blog.) 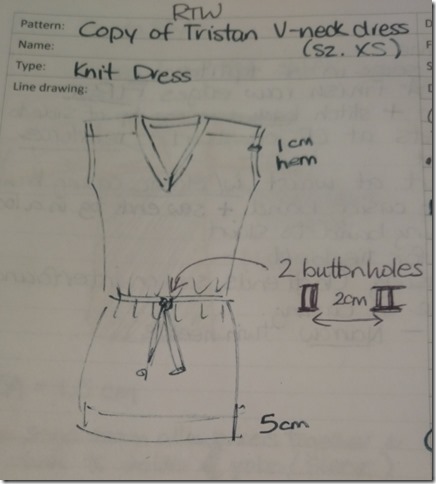 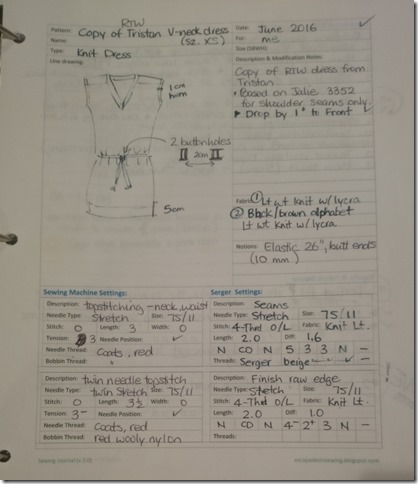 Hopefully I can find another knit in my stash for one more, it’s a stash busting year for me. And because I love it so much, I made a construction/assembly sheet for the next ones. (Available if anybody is interested, DOCX and PDF files.)

I’ve loved wearing both dresses last summer. They’re casual and comfortable, and it’s just so nice and simple to have one piece of clothing to decide on. I can even bike in them, as long as I wear my girlish biking shorts!

The Style Arc Diana Top pattern wins by far in my MOST MADE category. I first made the tank top back in May 2015, and then another 2 times (last one needs rebinding). But I’ve also extended it to dress length and made 6 versions (or 7, if I count an early mistake, where I didn’t add width at the hips. !#$%^&*!) You’ll find me wearing these dresses all summer, it’s just so easy to throw this beauty on.

So, starting with the first top, it’s made from a really lovely navy eyelet jersey that I bought at Darrell Thomas’ in a sale on a whim, and didn’t have a clue what I’d use it for. Honestly, it sat in my stash like a lost soul for over a year, probably longer. I have no idea what made me think of this pattern for it, but I do recall that feeling of Eureka!! 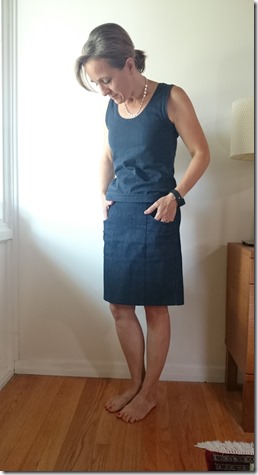 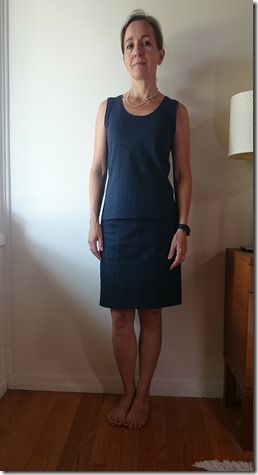 I followed the pattern instructions for the edges and just turned them under, but the neckline had to be shifted up as usual. The navy skirt is another absolute favourite, a Cake patterns Hummingbird. Love it. And in denim it wears so easily. I’ve worn this combination about a hundred times, over 2 summers, and I still love it. 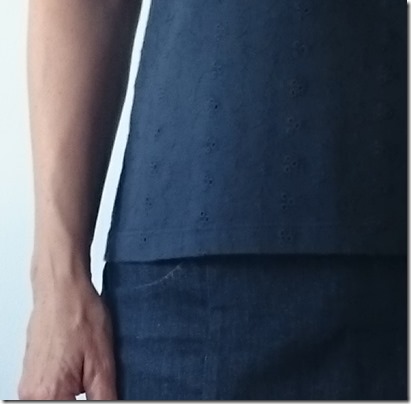 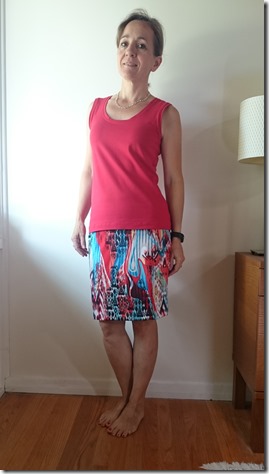 For the red jersey top I bound the edges, it’s OK but I prefer the look of the original finish. This skirt is also a Style Arc, the Fay skirt which is SO FRIGGIN EASY to sew! The design is fabulous, there are 2 layers but it’s one piece, the top one folds under and goes back up to be attached at the elasticated waist, so no need for a slip. The fabric came from Montreal where I went berserk and bought about 15 meters of assorted fabrics at bargain prices, unheard of here in Ottawa. I’ve got loads of this fabric left and will make the dress version for this summer.

Then the dresses, the first being the same navy eyelet jersey. This looks so elegant, it’s the fabric that does it. In August that same year, I made my funky synthetic version, also Montreal fabric (no idea what that material is, but it’s SO cool all the time, and never static.) Fabulous! I’ve had so many compliments on this dress. 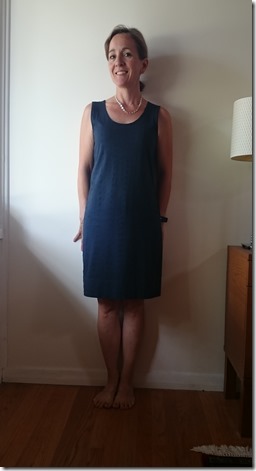 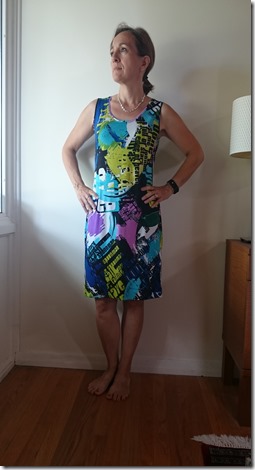 That fabric’s got a great stretch, I can tuck one side into the waist of my me-made Jalie cycle shorts and bike in it. (Poor photo, but you get the idea.) 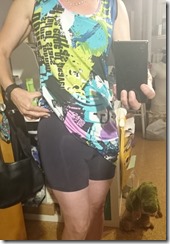 Then in the summer of 2016 I did another trip to Montreal where I bought EVEN MORE fabric and I made a whole bunch more.

The one on the left is a very stretchy fabric, and it really weighs down. The right one is a very similar print, but the fabric itself is a bit firmer and not so weighty, but I tightened up the bindings anyway.

It’s funny looking at these last two, I wasn’t sure about the fabric when I bought it, but they’re growing on me! The navy/red/wave version took more time because of pattern placement; I agonized over where to position the blocks! MUST make a note for future versions (cause I’m not finished making this), to stick with either plain or busy patterns like the previous two.

Roll on summer! I’ve got another one ready to sew.

Steph A
Ottawa, ON, Canada
I'm a stay-at-home Mum with 2 school-age boys. Before kids I was a Software Developer, now I want to go into Digital Analytics. But I LOVE to sew! Email me at steph_escapades (at) yahoo (dot) ca

You ALL inspire me to keep sewing!