The last two times I tried to make a neck warmer I sewed the wrong seam first, and ended up with the tube running sideways! So, I made notes and took lots of pics …I’m not making that mistake again. 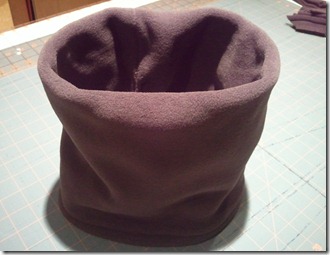 This neck warmer is made from a double layer of lightweight fleece, so all the seams are nicely hidden.

Finished dimensions for the neck warmer, which should basically go over your head without too much ease (W x H):

Cut out a rectangle of fleece, with the maximum stretch running widthways, as follows: double the finished dimension, for both width and height, plus 1/2 in (1.2 cm). All seam allowances will be 1/4 in (6 mm). 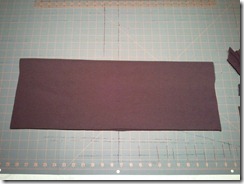 With the rectangle laid out widthways, fold the top edge of the rectangle down to bring the long sides together; in the pic to the right the fold is at the top (this will be the top of the neck warmer): 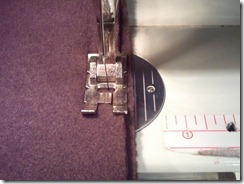 Using a 1/4 in (6 mm) seam allowance, stitch along the bottom using an almost medium width zigzag with a medium stitch length. The seam just needs to be stretchy enough so it won’t break when it’s stretched. Notice how the bottom layer is peaking out just a bit, this is just so I know where it is! It helped as I’m not using any pins to hold the layers together.

Put your arm through the tube, and grabbing the other end, pull it inside until it meets the other end, matching the ends of the long seam. Sometimes it helps to put a pin in at the top to stop the layers shifting around. 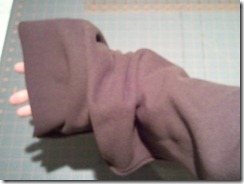 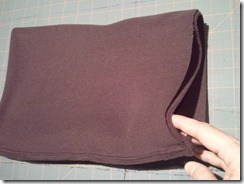 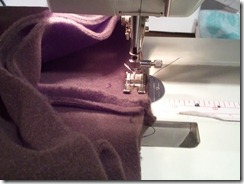 Starting just before the long seam, stitch the two round ends together leaving a 3 in (7.5 cm) gap so you can turn it right side out. I sewed the seam with the bottom layer peaking out a tiny bit again.

The pins in the pic below are only to show the opening, you can just eyeball it like I usually do, but you’ll need at least that much to be able to get your hand through and pull out the rest of the fabric. 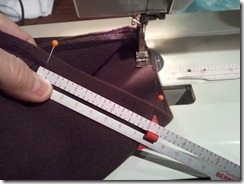 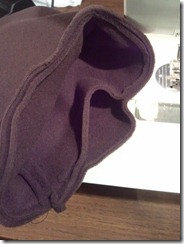 Now the fiddly part, put your hand through the opening to turn it right side out with the opening on the outside (shown in the pic on the right). 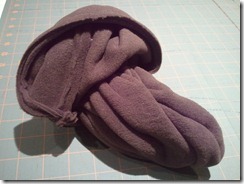 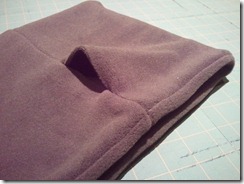 We’re almost finished. Next we close the opening on the inside side seam, this will be hidden. I forgot to take a picture of this, but it’s just an edge stitch along the opening using the same stitch settings as before, and making sure the seam edges are folded in. 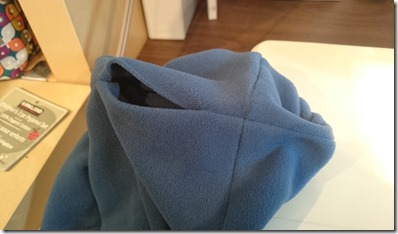 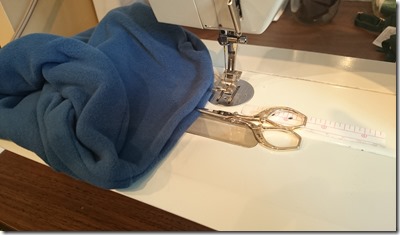 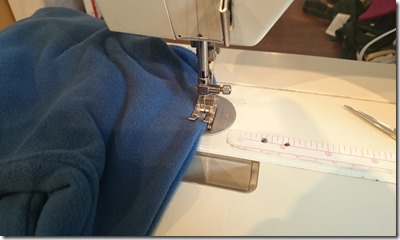 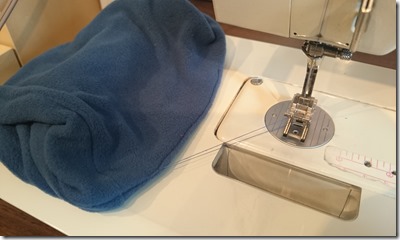 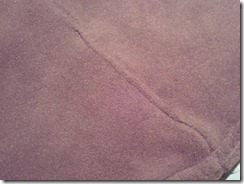 You can see here how it still lies quite flat (ignore the bottom edge for now! I did it in the wrong order.)

Turn the neck warmer right side out so the stitched opening is on the inside. 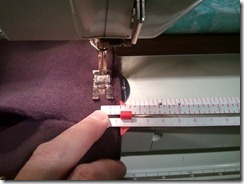 Last thing, topstitch the bottom, and you do it in one of two ways; I think I like the second a little better. Roll the bottom seam around a bit so it’s on top (on the inside of the neck warmer), and still using the same settings, stitch 1/2 in (1.2 cm) from the edge. 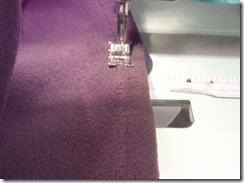 The second way is to roll the seam on top by 1/2 in (1.2 cm) and topstitch over the seam. If you fiddle with the seam allowance layers on the inside you should easily be able to open them flat and reduce a bit of bulk. 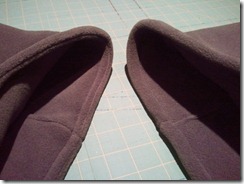 This way gives a nice round edge on the bottom, as you can see in the comparison pic at right. The one on the left is the first way, and the one on the right is the second way. 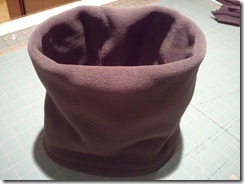 And voila! Here’s the finished neck warmer ready to wear. All you need now is to sew your very own label on it. This whole process took less than 10 minutes, that’s how fast they go.

You could make variations for different looks or for using different fabrics:

Have fun with this! It’s too easy to not make these for yourself …and everyone else.
Posted by Steph A at 10:55 PM

Steph A
Ottawa, ON, Canada
I'm a stay-at-home Mum with 2 school-age boys. Before kids I was a Software Developer, now I want to go into Digital Analytics. But I LOVE to sew! Email me at steph_escapades (at) yahoo (dot) ca

You ALL inspire me to keep sewing!